Specifically, you and I hitting the friendly skies for places around the world that match the alphabet that I've visited. Thanks to a great trip to Quebec, the alphabet opens up for a magic carpet ride.

In spite of the awful news that steals headlines, there really is more good in the world than bad. It's time to feel the goodness and hear the laughter that fill most people's hearts. I've met so many along the way, in large cities and small towns and villages, who've brought a smile.

But, um, can you guess where we're going for Z? 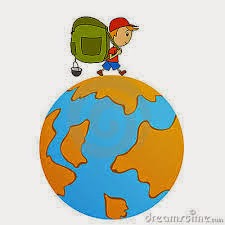 
Those with sane minds and peaceful hearts reacted as one to the murders in Paris last week, mindful as well of the massacre in northeastern Nigeria, earlier massacres in Kenya, still reeling from from beheadings of innocents and other acts of horror that have filled the news for far too long and, millions strong, raised theirs voices in unison: "Je suis Charlie."

The French love satire. It goes to the heart of who they are, the products of a deep history that gave a newly independent United States the Statue of Liberty, that gave the world Voltaire.

Francois-Marie Arouet (1694-1778), known by his nom de plume Voltaire, was a French Enlightenment writer, historian, and philosopher famous for his wit and his advocacy of freedom of religion, freedom of expression, and separation of church and state. He wrote more than 20,000 letters and over 2,000 books and pamphlets. As a satirical polemicist, he frequently made use of his works to criticize intolerance and religious dogma. (Wikipedia)

Some of Voltaire's philosophical sayings include:

Opinion has caused more trouble on this little earth than plagues or earthquakes.

Doubt is not a pleasant condition, but certainty is absurd.

Think for yourselves and let others enjoy the privilege to do so, too.

The truths of religion are never so well understood as by those who have lost the power of reason.

To the wicked, everything serves as a pretext.

Woe to the makers of literal translations, who by rendering every word weaken the meaning! It is indeed by so doing that we can say the letter kills and the spirit gives life.

It is difficult to free fools from the chains they revere.

Every man is guilty of all the good he did not do!

I might disagree with your opinion, but I am willing to give my life for your right to express it.