Welcome to Okinawa is a story about a long-ago day.  Before we get on that airplane (or after our journey), please take a sec to visit Tami Marie at The Things We Find Inside.  It's her birthday!  She's celebrating with a birthday bash to remember - and lots of giveaways and a blogfest!  Tami Marie's from Trinidad and has a business there.  She's a self-described "80's baby, a lover of animals and nature...and a lover of life."  We met through some photos she'd taken of a harbor in Trinidad.  She's got an awesome number of followers, but finds time to make each of us feel special.  I like that.  And think you will, too.

* * * * *
This post is dedicated to my husband, a recipient of the Silver Star medal, and to all those who serve and have served.  Semper Fi!


Days come; days go. Days roll into life. Days shrink the calendar into a vacation.  Days challenge with the unexpected.  Days end with dreams come true.  Days roll emotion and tragedy and beauty together.  Every now and then there is a day when time pauses and one wonders Why? How? If? and thinks Yes; No; Maybe; I don't know; I understand; I don't understand - before the next day dawns.  Here was such a day:
After graduation from Louisiana State University and a couple of years teaching experience, I decided the time had come to test my wings. I accepted a teaching position with the United States Department of Defense to teach on one of our military bases.  My assignment:  Okinawa (then a U.S. territory but long-since reverted to Japan.)
Family members shook their heads. The Vietnam War raged.  How could I live on a faraway island, a staging area for the Vietnam War, when life was so good here, in New Orleans?  They meant, of course, convenient access to family, that the bird would fly the nest and live - around the corner?  A puddle hop wasn't my idea of soaring.
I bought two red American Tourister suitcases, sewed appropriate dresses, skirts, and casual wear (for most everybody sewed in 1968), and flew from New Orleans to San Francisco.
With red suitcases in hand (for wheeled luggage hadn't been invented), I traversed to the international terminal, presented my government orders to the clerk at the the old Northweat Orient Airlines counter, and checked in for the flight to Kadena Air Force Base, Okinawa.
It was a chartered flight, a jumbo jet filled with soldiers, sailors, marines, and civilian government employees like myself.  I wore a simple sleeveless dress with a simple jacket.  Over 95% of the other passengers wore military service uniforms.  I was off to see the world.  They were off to war.  Big difference!
Prior to leaving New Orleans, no one had briefed me on what to expect, except for a two-page letter from the U.S. Government.  The first page provided Okinawa's geographic location:  An island about 464 square miles (1,201 sq. km) approximately 400 miles south of Japan that was the largest island in the Ryukyuan chain.  The second page listed suggested clothing to bring, most of which I sewed.  The mink coat the letter recommended, well, forget that!
The first leg of the flight, to Honolulu, Hawaii, was quiet with the (then) expected meals and movie.  When the plane left Honolulu for the next leg, to Wake Island (a U.S. territory), many in uniform became nostalgic.  We were officially outside the borders of the United States.  I can only imagine their thoughts. Surely it had to be difficult for the news about Vietnam war casualities was never good.
When we landed on Wake Island, we made a mad dash to the terminal for our last taste of fresh (not reconstituted) milk, disguised as ice cream.  Like others, I ordered three vanilla scoops.  And, like the other passengers, I stopped midway back to the plane.  The landing strip on Wake Island didn't leave room for error.  The plane's nose wasn't that far from very blue water.
The flight from Wake Island to Okinawa turned into a long haul.  Some slept.  Most didn't.  Conversation that had been sparse since the journey began disappeared.  A certain nervousness had permeated the aircraft.  I say 'certain' because I have never since felt such tight vibes.  I have also never since flown into a staging area for a war.
The plane landed at Kadena Air Force Base at about 3:00 a.m.  Very tired, we straggled off the plane.  Among the uniformed personnel, a slight streak of gallows humor prevailed as we walked from the tarmac to the terminal.  If I had been inside a movie, I suppose the director would have inserted raw expletatives.  That seems to be the way these days with books as well.  But, no, the profanity many have come to rely upon in 2011 wasn't said in the wee hours of that August morning in 1968.  And, counter image, everyone was unfailingly polite.

I sometimes think back to that walk, from airplane to terminal.  Most of the uniformed personnel would remain on Okinawa for scant days, then face their fate in Vietnam.  Yet, politeness prevailed.  When I crossed toward Safeway's entrance last week, the nicely dressed young teens ahead of me couldn't drop  expletives fast enough. I couldn't help but wonder how they'd handle the rest of their lives.

Anyway, inside Kadena's large waiting area, soldiers, sailors (medics), and marines waited.  Lots of them.  Enough to fill the jumbo jet we'd come in on.  They began boarding before I exited that section of the terminal - on their way to Vietnam.  Laughter filled their steps.  The fear that laced the laughter made my blood run cold.  Statistics said some would return to the United States in a flag-draped coffin.

Outside the brightly lit terminal, organized chaos reigned.  Military buses dropped off troops for the next flight to Vietnam or picked up troops from my flight.  The few civilians either left with waiting colleagues or, like me, got into the taxi line.  I didn't know what to expect so made sure I stood far back enough in the line to learn the procedure:  Produce my government orders and state the destination.  For me, it was Naha, Okinawa's capital, and an army base near the city.

My taxi driver didn't speak English.  He opened the door for me, put my two red suitcases in the trunk, and off we went for the 30-mile drive.  It was about 4:00 in the morning now.  I'd like to say I was nervous, but, no, such a different world opened up before me, my heart raced with anticipation.  On one side of Highway 1, moonlight danced on the bluest water.  On the other side, small shops with Japanese signs advertised their wares.  Since Louisiana is water-logged, I concentrated more on the shops, some with lanterns, many with banners, all with windows filled with bolts of cloth and kimonos or lacquer bowls or children's toys or shoji screens or volumnes of books or - oh! - one slice of Okinawan life after another.

From my family's tearful farewell at the airport in New Orleans to this taxi ride, I'd lived in my head, speaking only when a specific situation called for specific English.  Early on, I realized this trip wasn't a gab-fest with idle chit-chats to pass the time.  Commercial passengers to San Francisco wanted to be left alone with their thoughts.  Military passengers to Okinawa needed to be left alone with their thoughts.

My taxi driver showed identification that permitted entry to the army base at Naha. Security had my name on a list and which building I'd live in. The driver passed rows of army barracks, rounded a downhill curve, and entered a housing area with hundreds of flat-roofed, square, cement buildings, Bachelor Officers' Quarters, with four people to a building.  (I would make life-long friendships with the two female teachers who came later.  One visited this past weekend.  Glorious!)

The taxi driver carried the two red suitcases to an unoccupied, unlocked building.  I paid the man, an elderly gentleman with a weathered face, and thanked him with words from my phrase book:  Dome arigato.

He replied, "Welcome to Okinawa, sensei."  He bowed very low.  I bowed as best I could.  He bowed again and returned to his taxi.

I entered the BOQ and switched on the lights.  I saw basic furniture in the central living room, a kitchen with a frig and a stove, four bedrooms (two on either side), and a full bath on each side.  No sheets or blankets.  No kitchen utensils.  I didn't care.  I kicked off my shoes, flopped on a lumpy mattress, and fell asleep in a nano second.

I awoke around noon to the drone of planes landing and taking off on the nearby military airstrip.  It was a bright, sunshiny day.  I wondered how the troops boarding that flight for Vietnam had managed.

For two years I saw a lot, traveled a lot, learned a lot, and wondered a lot.  I will share this: what people at home think is happening over there isn't always true; the truth is there for people to read, but it's more convenient to think. 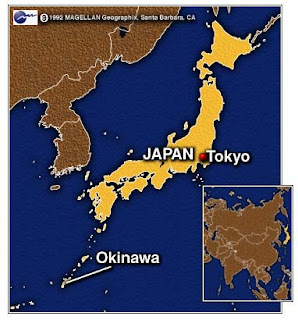 Posted by Kittie Howard at 8:51 PM