As Easter approaches, I'm entertaining nice thoughts about past holidays:  the smiles . . . a little something that stuck in the mind's eye -- a panoply of tulips near the front steps to my mother's house and when I opened the door the aroma of good things cooking in the kitchen flooded my senses. Yes, that's what happy memories do. They flood the senses and wrap the soul in warm fuzzies.

Such is the feeling now. Even though it's cold outside and spring's a no-show, I feel warmed and blessed by so much. So many good things. From the Hallmark angel my niece gave me to family trips and gatherings to an Easter in another country that was also very, very nice.

In 2004, my husband and I spent Easter in Thessaloniki. It's a traveler's story for a lazy afternoon as to how this came to be, but, suffice it to say, we were delighted it did. Even if we aren't Greek Orthodox and even if Easter's dates float among the Christian faiths, it didn't matter. Oh, but life's roller coaster can take some magical turns. I'd like to share one of those turns. Come on. Don't be shy. Put on your virtual Nike's. We've got some hoofing to do before we get to what infused the senses . . .

My grandmother kept her Longines wristwatch in its original box in her top dresser drawer. When we kids saw the watch on her slim wrist, we figured she was either going to the doctor or to visit a certain cousin. She complained doctors didn't see patients when they said they would and this cousin ran at the mouth so much she was going to talk her way out of heaven. Although I don't know about the heaven part, my grandmother was right about the chatty cousin and doctors who overbooked patients (even Back Then).

My mother kept the Longines wristwatch she rarely wore in a glass case on top of her dresser. We kids knew not to touch it, that something awful would happen--perhaps our hands would fall off or some such. Since my mother didn't raise her voice or threaten dire consequences, just said 'Don't touch,' I never quite figured out how it worked that we didn't touch her watch. But we didn't.

None of us kids had a watch. There was little reason to monitor time. School ended when it did, and regardless of the homework, books usually closed at the same time each school night. We'd watched a bit of television, take our baths, and off we'd go to bed. Weekends opened up--Friday night football, water skiing, perhaps a trip to Baton Rouge or the house filled with family and friends (hopefully with kids our ages). But Sunday night meant back to the books to make sure the homework was just right before going to bed.

My grandfather wore his watch when he left the farm for various meetings and the like; my father wore his watch to work during the week but not on weekends. Their watches had big round faces and were the polar opposite of dainty. Neither man had a habit of constantly checking his watch.

I like watches and can't pass a display window without stopping. Not that I want to purchase these watches. There's just something about how jewelers decorate a basic timepiece that appeals. More on the intangible level, I admit to pushing the clock to accomplish goals, something I've given thought to lately.

Actually, a sepia-tone photograph of my grandparents I came across in a box (while looking for something else) triggered these thoughts. My grandparents are sitting on a bench in El Paso, Texas, very nicely dressed in the 1920s fashion of the day, but neither's wearing a watch.

My grandmother used to fuss at me when I got too busy. "What are you rushing to?" she'd ask with a chuckle.

I had no answer for her then and would have no answer now, except to say that this afternoon I heard a bird chirping its heart out and stepped outside to find this feathered Adele. One chirp led to another until I finally spotted a Cardinal at the very top of a still-bare oak tree. I don't know how long I listened to its serenade. I didn't have my watch on. But the memory is forever.

When Susan Reichert, the editor of Southern Writers Magazine, asked if she could include "Rings of Trust" in the Magnolia Corner of the magazine's March/April issue, I was over the moon!

I hitched a Tinker Bell ride on the stars when she added that "Remy Broussard's Christmas" and "Rings of Trust" would be included in the magazine's online bookstore. And, I'm going to be a contributor to the magazine's blog, Suite T. (I'd previously contributed a post last July). You know I'm excited! 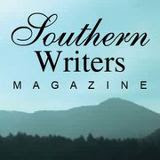 Southern Writers Magazine is the gold standard for us grits-loving Southerners. However, the magazine not only has a solid following in the South but a national reach.

With so many people on the move these days, one can always touch 'home' or see what 'home' is like if you've got a WIP with a Southern setting. If you'd like to check out the magazine's site, go HERE. From blogs to magazine submissions to writing contests to seminars, there's a lot going on.

Now, none of this would have happened if it weren't for your support. From the bottom of my heart, I thank you. Without a doubt, some of the nicest, most caring people in the world are in Blogville. XOXOXO