You've got to be the sweetest, nicest people in Blogville! *smiles happily, sends hugs*  Thank you, thank you for your get-well wishes, bowls of soup and awards (will post later).  That nasty bug has finally taken a hike!  Of course, with life being life, other things happened to keep me away a bit longer, but, enough, we gotta move on!  This includes welcoming new Followers!  *sends big hugs*  There are some great mug shots in the sidebar.  Those of you who haven't met, come on, click on over and say Howdy!

When I began blogging, I knew the twist for my Louisiana stories resulted from 1867 occurrences.  What I didn't realize, though, was how much the simple docking of a ship in New Orleans rippled into history. The Christmas holiday trip to New Orleans showed me that often what's taken for granted once swirled in a hubris which resulted in change, both real and superficial.

I have distinct memories of my great-grandmother, Ramona Garcia Oubre.  As was the custom Back Then, families regularly interacted, especially on Sundays, with an entire day devoted to doing, well, not much beyond what families did when they got together (hang out with their posse):  talk, laugh, eat, tell stories, and linger into the day.

Great-grandmother Oubre always wore, in an era of absolutes, a long prairie dress and bonnet, even inside the house.  On Sundays she always made a pie for after-dinner dessert.  As fruit trees and berry bushes abounded, these pies reflected what was in season.  However, her lemon meringue pie reigned as the favorite.

Everyone gathered around when my great-grandmother removed the pie from the oven (for she wouldn't relegate this task.)  We always oohed and ahhhed.  She had baked a pie with a peaked, feathery light, golden meringue in a wood-burning stove!

Ramona Garcia was about six years old when she (and probably other siblings) and her parents came to the United States.  Her family fled a village in northern Spain. This Jewish family fled from a pogrom, where Jews are massacred, that had reached the village nearest them.

My great-grandmother's parents had sufficient money to buy passage on a ship leaving Spain, as it turned out, for New Orleans.  The family gathered those possessions they could carry and trekked to a port.

Ramona Garcia's parents died in the 1867 yellow fever epidemic in New Orleans.  Spanish Carmalite nuns found her begging on a street corner.  She was approximately seven years old.  The Carmalite nuns brought her to what is now the Bourbon Orleans Hotel (and where my husband and I stayed during Christmas.)

The many orphanages in and around the French Quarter refused to give my great-grandmother refuge because she was Jewish.  Henriette Delille's order thought differently.  African-American nuns not only sheltered her but provided a first-rate education.  She learned to read and write in Spanish and French and became proficient in those arts then expected of a young lady: cooking, sewing, embroidery, singing, and ballroom dancing.  However, those days being what they were, with such prejudice against Jews, the nuns decided Ramona Cohen should be Ramona Garcia.  Again, the days being what they were, her given religion became Roman Catholic.

When I asked my grandmother if her mother had converted out of belief or out of circumstances, the thoughtful answer was that she never converted, but did attend the Catholic Church with her Catholic husband and their children, who were born into the religion.  However, as each of her eleven children became an adult (my grandmother was the youngest), she told the story of how and why she came to the States and that she was a Cohen, not a Garcia.

My great-grandmother met my great-grandfather though a whistle: he, a fourteen-year-old French sailor on Bourbon Street; she, a thirteen-year old standing at a convent window looking down.  He whistled first!  The two song birds married. My great-grandfather was the nephew from the family line that first came to, and remained in, what is now Louisiana in 1679, ten years before Iberville founded Biloxi.

The secret, that Ramona Garcia was Ramona Cohen, reverberated, much like a pebble skimming across water.  Even though my grandmother was born into the Roman Catholic faith and followed its tenets (well, okay, followed what she chose to follow), she feared neighbors along the country bayou, all devout Catholics (who also chose which tenets to follow), would "sense" (her word) something was amiss "and nose around" (her words) and "turn against the family" (her words) if they learned of the Jewish heritage that, by Jewish law, said my grandmother was Jewish, as was her son, my father, but not his kids as lineage passes through the mother. My grandmother held a deep fear that neighbors would cut her out of a rural lifestyle where neighborly relations determined much.

So, grandmother had embarked upon what my father called "an exaggerated Catholicism" to shield the secret.  My father, of course, knew the secret, didn't care, and rolled his eyes when the Catholic Church excommunicated him for joining the Masonic Order.  But he said nothing about the secret as he had promised his mother not to do so while she lived.

her later years, my grandmother had come to believe that what caused fear had to change, in essence, my great-grandmother was who she was, and should be embraced for being that person.  She wanted the secret to be a non-secret, not only because she was proud of her mother for surviving much, but because my grandmother spoke openly about how "people need to learn to work together." (her words)  Actually, that afternoon in the kitchen on her Louisiana farm, my grandmother spoke at length about mistakes she'd made and lessons learned and how she didn't want my generation to fall into the trap of living a life that pleased others or what others wanted. (Trust me on this one, I haven't.)

Since my grandmother had traveled outside of Louisiana, I asked her if she thought people elsewhere wouldn't have turned on Jewish roots.  She didn't hesitate to say no and talked at some length about how she thought either hid in a group mentality or liked a group's power as much as they feared the group turning on them.  Bottom line:  my grandmother thought people everywhere should respect each other.  And, so, with the secret released today a promise is kept

I'd like to thank the management and staff of the Bourbon Orleans Hotel for their time, interest, and enthusiasm. I can't rave enough about everyone's warm and generous hospitality.  Plus, rooms facing Bourbon Street are out-sized, like an apartment; the dining room has a chef (lured away from Muriel's) - the 'Chef's Creation' is to die for, lots of crawfish and seasonings scrambled in those eggs, ohhhh, so good!
I'd especially like to single out Mr. Ron Laigale, the widely respected and long-time concierge at the Bourbon Orleans, for providing me with invaluable materials and information.  I learned from Mr. Laigale that New Orleans, because of its Spanish history, was a common destination for many ships with Jewish passengers escaping persecution in Europe in the 1800s and that a significent percentage of the Catholic population in New Orleans could trace family roots to this era.

Mr. Laigale also encouraged me to contact a French Quarter resident who is writing a book on Henriette Delille.  And he pointed me in the direction of a French Quarter resident whose family came to the United States to escape persecution and who could be descended from a brother my great-grandmother may have had.  I totally love how all this interacts and how, as big as the world is, it's pretty small after all.

In the meantime, I'm going to post my Louisiana stories as usual, when the whim hits.  If a bit of exaggerated religion interacts, just smile and read on.  You know the secret. 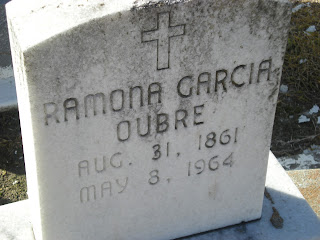 Posted by Kittie Howard at 3:27 PM No comments:

Jumping into the New Year!

Happy New Year!  From our house to yours, heartfelt wishes for a healthy, happy, and prosperous New Year.  And I hope ya'll had a great holiday season!

Thursday evening, hub and I returned from our trip to New Orleans (after driving from Gatlinburg, Tennessee, to the Northern Virginia, environs.)  We had a glorious time in the Big Easy (New Orleand)! (I've posted some photos on the sidebar.)

Thanks to the helpful personnel at the Bourbon Orleans Hotel, I learned much about my great-grandmother's early history.  (Her parents died in the 1867 yellow fever epidemic; Spanish Carmelite nuns brought her to an orphanage/convent, now the Bourbon Orleans Hotel.)  Yes, yes, I felt her energy!!  And I'm going to share this with you, including Great-grandma Oubre's 'secret', after I cross-check my notes.  Her life was such a rich tapestry, I'm awestruck at how she persevered and prospered.

In the meantime, I'm posting photos from our drive along Mississippi's Gulf Coast (going to New Orleans) and across the middle of the state (returning to Virginia).  A lovely Mississippian, Shelley Rickey, is in Rotterdam, The Netherlands.  She's doing what young people do:  seeing the world, learning and growing in the process.  Shelley plays the ukulele and has quite a following in Europe, along with the band she's in!  I also learned much from her blog about holiday customs in The Netherlands.

From one who's spent a lot of time overseas and remembers how it feels to touch Home to one who's There now, as promised, some Mississippi photos: 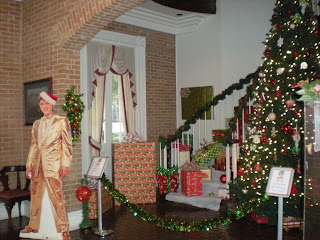