Beaches of Normandy--June 6, 1944: The Air Campaign; Tips for Visitors 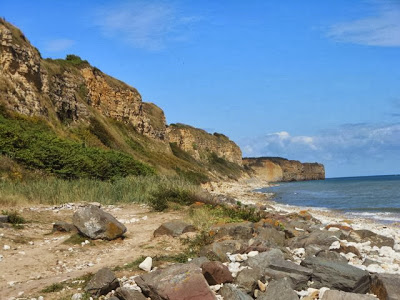 The Invasion of Normandy by Allied forces on June 6, 1944--code-named Operation Overlord--combined air, naval, and ground forces in the successful campaign. A previous post ((here) focused on our over-all two-week, self-guided visit to Normandy's historic--and sacred!--beaches this summer. My previous post HERE focused on the Ground Campaign. This post focuses on the Air Campaign. I spent considerable time researching historic film footage to link whenever I could.

Photos and historical notes will follow after the tips.

TIP: We met many Canadian and American tourists who were disappointed--some angry--at how little they got to see on their professional tours. The Beaches of Normandy are not a complicated area to navigate. Tourists should be especially wary of operators who offer tours that enter at one airport and exit at another. Lodging isn't as expensive as you'd think. We flew into Paris, took the train to Caen, picked up our rental car, and after two days at the Best Western, hit the road. Since we'd lived in Africa, we knew the often inexpensive Mercure Hotel, a French chain, gave good value for the money. It was our choice to spend two weeks in Normandy, but the circuit could be done in a week.

TIP: Pick up your rental car in either Paris or Caen, not Bayeux as there aren't as many rental cars available there. Caen was in and out, no problems. TIP: Rent a diesel car. By the end of the first week, 500 miles later, we hadn't used half a tank. TIP: It surprised how close many sites were. Tour operators pick one, allow little time and move on, when, in truth, with little effort, the visitor could see much more. Visiting Pegasus Bridge and nearby Merville gun battery set the stage for the Invasion's force and power and what troops/airmen encountered throughout. When you reach the beaches, the impact of what they went through is beyond words.

TIP: Be wary of tours that stop in Bayeux but don't allow time to visit the Bayeux Tapestry. This was where we encountered the angriest tourists. Buyer Beware definitely applies!


When I told someone about the trip my husband and I took to Normandy, he said he'd visited a few years ago and that the experience "brought me to my knees." Whether physically or mentally, he was right. It was a matter of considerable internal debate about whether or not to take my shoes off and let waves at Omaha Beach that had once run red with blood lap my feet.

When my husband, a career U. S. Marine with the Silver Star from Vietnam, learned of my quandary, he said, taking my camera. "Go. That's why they were here--so you could go." So I did. . . an overwhelming experience for which I lack the words. 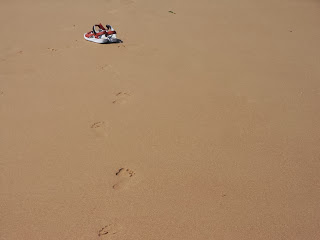 The Invasion of Normandy by Allied Forces on June 6,1944 actually began at 2200 hours on June 5. During Operation Neptune. Five assault groups (130,000 men) departed the English Coast in 6,939 vessels to cross the English Channel in convoys via mine-swept corridors. 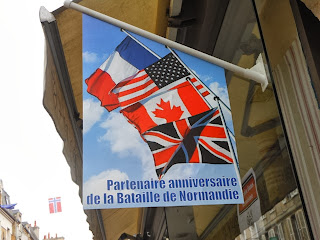 Units involved in the Allied Airborne operations were:

During the Invasion of Normandy, the British objective was to neutralize the zone between the Orm River and the Dives River, capture the German's Merville gun battery and designated bridges. At 12:16 on 6 June, 181 men in six Horsa gliders, five landing within yards of Pegasus Bridge, surprised the Germans and took control of the bridge in 10 minutes, losing two men in the process.

(Note: for those interested in an in-depth description about securing the Merville gun battery, an article by Neil Barber for the UK's 1940s Society is here.)

An overall summary of the timeline:

At 0100 - 0230 hours, parachuting of successive waves of troops from regiments and brigades forming British and American divisions commenced.

At 0320 hours, heavy equipment and and reinforcements by glider arrived.

At 0550, naval bombardment of German positions began, preceding the approach of amphibious ships and landing crafts.

At 0600 hours, attacks by medium and heavy bombers on German fortifications along the Normandy Coast totaled 1,333 bombers and 5,316 tons of bombs. Bombardments ceased five minutes before H- hour and troop disembarkation:

Historic footage of the Air/Ground Invasion from the History Channel uploaded to YouTube (2:53 min) is HERE! (Give it a few seconds to start.)

The American Airborne objective was the establishment of a bridgehead on the west bank of the Merderet River; capture St.-Mere-Eglise, Beuzeville, Pont l'Abbe, and close roads to Utah Beach. 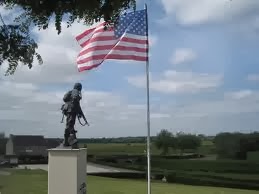 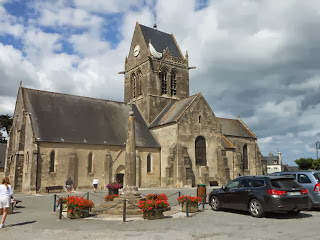 To the left, directly across the street is St. Mere-Eglise church. Note the parachute on the bell tower. (Personal photo) 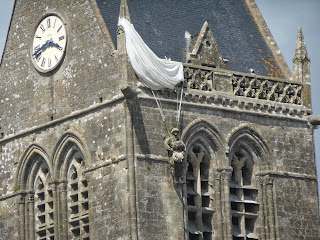 Private John M. Steele (1912-1969), made famous by the 1962 movie The Longest Day, hung from the church as depicted in this monument. American soldiers from the U. S. 82nd Airborne parachuted into the area west of St. Mere-Eglise in successive waves. The village had been the target of an aerial attack. A stray incendiary mom had set fire to a house east of the village. The church bell called villagers to form a bucket brigade that German soldiers supervised.

However, the fire had lit up the area when two planeloads of paratroopers from the 1st and 2nd Battalions were dropped in error directly over the village. They were easy targets for the Germans. However, the Germans thought Private Steele was dead, hanging from from his stretched parachute cable and ignored him. Even though he was injured during the entrapment, he played dead and was one of the few to survive the carnage.

The Germans realized he wasn't dead when they later cut him down. Taken prisoner, Private Steele escaped and rejoined his unit, 3rd Battalion, 505th Regiment, and fought with his unit's attack on the village. St. Mere-Eglise was the first village in Normandy liberated by American forces. A YouTube link to historic footage is HERE. Although parts are somewhat dark and grainy, I wish I'd seen this before our trip. (Wikipedia/Personal photo) 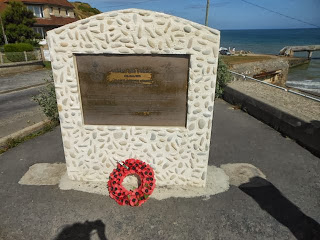 There are so many monuments throughout Normandy that are unit specific or smaller ones that are fallen hero specific. (Personal photo) Many families pay visits to lay a refreshed poppy wreath, often with a child old enough to understand placing the wreath. Although visitors remained at discreet distances, the private ceremony tugged at hearts. (This photo and the ones that follow are personal photos.) 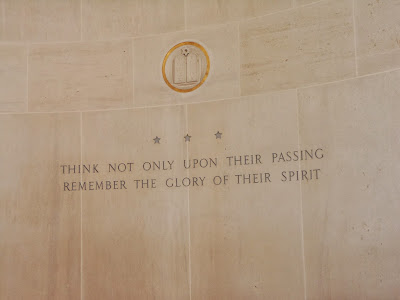 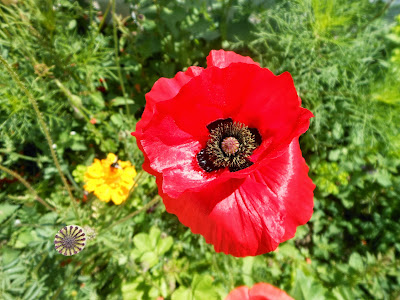 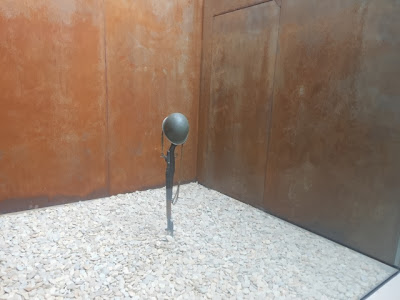